Log in
By revan546 - United States - Hillsborough
Today, while he was eating chicken, one of my friends asked me why I'm a vegetarian. I responded that I believe in animal rights and don't like the conditions the animals are forced to live in. He looked at me incredulously before explaining that "chickens aren't animals, they're birds." FML
I agree, your life sucks
45448
You deserved it
9522
190 Comments
Favorite
Tweet
Share 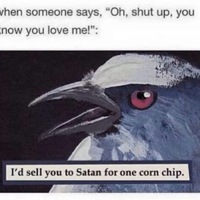 revan546 tells us more :
Hi guys, OP here. Yeah I've been a vegetarian for a few years and my friend finally decided to call me out on it. I think i died a little inside when i heard it haha. He eventually did admit that he was wrong and we're still friends and whatnot. Common sense isn't so common nowadays though is it.
Animals

While I agree Humans suck in many ways, hunting and killing animals is no different than 'animals' doing the same. Humans are weak, we need things like weapons to stand a chance. As a race who understands the weight of our actions (sometimes) we do have more of a responsibility To save the planet though.
Send a private message 4 1 Reply
Reply
No, 161, we are omnivores. Herbivores have an INABILITY to eat meat. We can digest meat and it is in no way harmful by itself. Our ancestors, before agriculture came along, were foragers and lived off the land. This included meat. It seems like you're just throwing logic out the window to try and justify condemning all of humanity. I do personally believe that we should respect what is around us and respect the earth when we use its resources. I also don't agree with how mankind has abused the earth for so long, but what you're saying is completely ridiculous.
Send a private message 4 0 Reply
My guy fell out of the nest it seems...
Send a private message 8 5 Reply
thats when you take the opportunity to really mess with him and tell him that they can't be birds since they don't fly. Considering how smart he is, i'm sure he'll believe you..
Send a private message 42 2 Reply
Reply
Talk about smart I'm confused if OP is only a vegetarian because he disagrees with eating animals that have been bred and lived in awful conditions just to become food, what's wrong with free range organic? Or is OP just one of those annoying people who feel the need to over explain? When I ask why you are veggie, I'm generally after a 'I don't like meat' or 'I disagree with killing animals for food'. Not a lecture.
Anyway
Send a private message 4 11 Reply
Reply
Free range organic is expensive, and isn't always exactly what they advertise. If you are only looking for two answers, why even bother to ask? There are a lot of different reasons people go vegetarian, not just the two you listed.
Send a private message 12 2 Reply
Reply
Also, I hardly see how answering the question honestly with one simple sentence is a lecture...
Send a private message 10 0 Reply
I say Fuck His Life if he doesn't know birds are animals.
Send a private message 14 4 Reply
Reply
really, but u do
Send a private message 0 0 Reply
You know how to tell if someone is vegetarian? Don't worry, they'll tell you.
Send a private message 78 13 Reply
Reply
I know this is a joke, but I thought I might take the opportunity to say that this isn't true for all vegetarians. I never feel it necessary to talk about my diet unless it's directly relevant to the conversation (like right now) or someone notices and asks me about it. And even then I don't feel the need to "preach" and try convince anyone that they shouldn't eat meat, I only explain my reasons if they ask just like the OP did.
Send a private message 21 23 Reply
Reply
I would definitely have to say, that is more so true for Vegans than vegetarians.... Somehow, in any conversation, it'll come up..
Send a private message 21 0 Reply
Reply
Most vegetarians are nice about it like you, and I appreciate that. Vegans on the other hand...
Send a private message 14 3 Reply
Reply
I know a lot of vegetarians, and for the most part, they're pretty cool about other peoples choices etc. But sometimes you get assholes vegos that go around judging everyone and thinking they're better than everyone else. My old flatmates gf used to come over, and bitch and moan that we eat meat, and she can't stand the smell of steak, and that she had to use 'yucky pans with meat juice on them' if she wanted to cook for her boyfriend. Firstly, she had only been a vegetarian for 2 months by this stage. Secondly, don't come to my house and complain about what I'm cooking when I'm not cooking for you anyway. That sort of thing does not endear vegetarians to people.
Send a private message 5 1 Reply
Reply
How do you know if someone isn't funny? Don't worry, they'll recycle ancient, exhausted one-liners like this.
Send a private message 3 1 Reply
Fail!!
Send a private message 3 20 Reply
Reply
2009 called, it wants its word back.
10 3 Reply
Wait, your friend likes to eat cock?
Send a private message 8 33 Reply
Reply
You're trying too hard.
Send a private message 29 1 Reply
Next
Spicy
Today, I know my life is awesome when my partner and I have to plan watching movies and having sex around his drinking schedule. FML
I agree, your life sucks
42
You deserved it
12
1 Comments
Today, my best friend confided in me that she's going to have sex with her cousin. Shocked, I tried to convince her not to and how it's a horrible idea....
I agree, your life sucks
872
You deserved it
135
8 Comments
See all the Spicy FMLs
© Beta&cie, All rights reserved