Log in
By mariet - United States
Today, my sister lost a leg. Immediately after hearing the news, my boyfriend started cracking jokes about getting her a job at IHOP. FML
I agree, your life sucks
52934
You deserved it
6314
231 Comments
Favorite
Tweet
Share 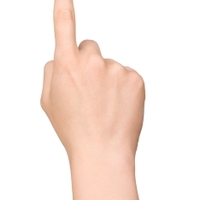 mariet_fml tells us more :
Holy hell, I forgot that this made it to the site. To answer some questions: This happened several years ago. My sister is a soldier, was deployed, bomb went off, lost her leg. I'm not going into details because it's still difficult to discuss. She has a desk job now and gets around fine on a prosthetic. We did not break up directly because of this. We had a huge row and I threw him out of my apartment. I didn't speak to him for a week. He apologized, said he just felt awkward and didn't know what to say, and I forgave him. We broke up later for different reasons. Mostly he is a nice guy, he had never shown any kind of insensitivity before this (he even came with me to my grandmother's funeral) but this was a bonehead moment. Some people suggested that I "know it's funny." In a hypothetical situation, it is funny. After she went through physical and emotional therapy, it is funny. I was reminded of this event because we went to IHOP and she jokingly asked for an application, saying she is automatically qualified. But at that moment, when I was in shock and could barely breathe? Nothing was funny. When you hear this kind of news and you are not even sure if your sister is going to live, she is the only one that can cheer you up. So fuck you guys.
Health Today, I got on an empty tram and decided to sit at the back. A few minutes in, I heard a noise. Thinking it was the tram, I decided to ignore it. When I heard what sounded like a giggle, I looked around to see that it wasn't the tram, but it was some creepy middle-aged man taking photos of me. FML
I agree, your life sucks
30261
You deserved it
2480
120 Comments
Favorite
Tweet
Share
By verno02 - Canada

Sorry, that was a TOTAL accident ;P


That sucks OP. Break a foot off up in his ass. Either that or break his legs, see how he likes it.
Send a private message 7 7 Reply
Reply
Don't you have a brother that lost a leg for you? Wait... was that his leg or his arm?
Send a private message 0 3 Reply
Next
Spicy
Today, the guy who told me he “wasn’t looking for a relationship” started being in a relationship with another girl. I lost my virginity to him and went...
I agree, your life sucks
307
You deserved it
126
4 Comments
Today, I had to create a new password for my computer. I had to do it to stop my father from watching porn on my computer. FML
I agree, your life sucks
567
You deserved it
41
1 Comments
See all the Spicy FMLs
© Beta&cie, All rights reserved