Log in
By molliciousj - United States - Houston
Today, while driving, I saw a dog run across the road. Feeling sorry for the pup on a cold, rainy night, I pulled my car over to pick it up. Once in, it started freaking out so I turned on the light. It was then that I realized I'd just put a wild coyote on my passenger seat. FML
I agree, your life sucks
51968
You deserved it
16272
203 Comments
Favorite
Tweet
Share 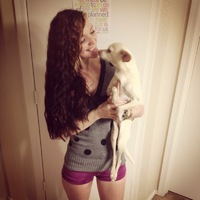 molliciousj tells us more :
Okay, so this is embarrassing but you guys asked for it! First of all, I'm a receptionist at a vet hospital so I have a big soft spot for animals. When I saw the little creature run across the road I thought it could be someone's lost pet or a stray doggy looking for shelter. I couldn't just keep driving. The coyote was also pretty small so I assume it was a fairly young one. In my defense, it was super dark out and it's foresty where I live with little to no street lights so visibility is very limited. When I pulled over I saw a glimpse of the fuzz ball in my headlight, huddled under some bushes. I had a dog lead in my trunk that I took out just in case. The pup never saw me though so I was able to walk right up and swoop him. He squirmed a bit but not much which is surprising. Now, I've seen a ton of dogs come into the vet hospital that I work at which are half coyote or wolf and look very similar....so it's a real thing. I'm not entirely crazy. Ha. Anyways, upon setting the coyote in my car when he began freaking out and I turned the light on, there was no mistaking that this was a wild animal. I was face to face with the little guy who was scared to death that he was trapped in a driving machine with an insane girl who picked up a feral animal. Haha. He was jumping around and pacing in my car. I got out and ran around to open the passenger side door. I left both doors open and as soon as he saw an escape he took it and ran off. Just so you know, there were no animals harmed in the happenings of this FML and no damage done to my car (although he did poop in it) but I feel like such a jerk. I'm sorry, poor little coyote. :(
Animals

By KamiAzaaaaaa - United Kingdom - London
Today, I found out my credit card was maxed out to the penny, all thanks to purchases made on an online wine store. Apparently my mother was thirsty enough to steal from her own son. FML
I agree, your life sucks
23681
You deserved it
1535
41 Comments
Favorite
Tweet
Share
By Anonymous - 11/7/2020 23:06