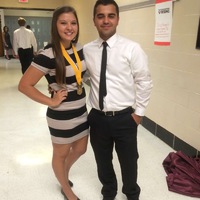 Noah98 tells us more :
Hi, OP here. Just to clarify, my dad works third shift so this was during his time off. I simply thought it was funny that the roles seemed reversed. He does work hard to provide for us.
Miscellaneous

i simply missed a joke. no need to throw a fit..it happens. some people are slow sometimes.
Send a private message 6 14 Reply
Reply
I feel like it's more than just a sometime thing for you Ella. =)
Send a private message 14 9 Reply
Reply
#20 that's not my name.
Send a private message 2 17 Reply
Reply
I so doubt that. At 18 OP is still technically in debt for everything up till the day they received their first paycheck, At 18 OP is welcome to move out and say FU to their parents if they want. What OP doesn't have the right to is to go online and complain they are living at home and life is tough because they have job and not get called out on it.
Send a private message 6 11 Reply
Reply
It wasn't funny at all so there is no way you could know it was a joke.
Send a private message 9 2 Reply
Reply
Um how do you know the OP is in debt? Just because he's 18, doesn't mean he owes anything, I didn't have any debt at that age. Unless you are referring to him being in debt to his father/parents because they raised and paid for him. Which in that case you're wrong, becoming a parent means you're obligated to pay for and raise that child until they're of age. A child isn't in debt and doesn't owe their parents ANYTHING just because they cared for them, that's literally their job as a parent, and holding that stuff over their kids' heads is manipulative and controlling. A kid is NEVER in debt to their parents for raising them. OP has every right to complain, they're still human, just because they might live under their parent's roof, which we don't know for sure it could be his own house and his father lives with him, doesn't mean they can't complain about anything, that is ridiculous logic. Also just because they live at home, doesn't mean life is easy, they could pay rent and for everything they need, which is just like anyone else who lives away from home. I don't think it's right to judge someone so harshly just cause they live at home, you don't know their situation.

I'm conflicted with this one because I think it's fine that the father played video games, I don't think it's a big deal. But I know if the roles were reversed, and it the the 18yr old gaming all day, he'd be attacked and criticized for it.
Send a private message 1 1 Reply
Reply
#1 That's not necessarily true. My half uncle has 2 children and has never had a job in his life. Yes, never. He's 47 and makes his wife (he's had 2) pay for everything and work while he stays at home playing video games. You may be thinking, &quot;he takes care of his kids though right?&quot; Wrong again. After he divorced his first wife he never paid a dime in child support and with this kid he drops it off at a daycare because he wants to play video games not take care of a screaming child. He's a disgusting waste of space.
Send a private message 1 0 Reply
Reply
#23, your name is Ella. Unless I can't read I am pretty sure the online name/alias or whatever people like to call it, is &quot;Ellabellaboom.&quot; Hence calling you Ella for short.

Or I am just completely stupid and should never call people by their names they choose. I'm sure someone will let me know.
Send a private message 1 0 Reply
I mean.. so? Day off? Early Retirement? Disabled? The mans 45. Unless he's been a piece of shit your whole life or didn't work. Don't know why what he does is your concern. Certainly doubt you'd want him judging you for something similar.
Send a private message 38 3 Reply
Well he can play video games if he wants to. Not sure if i read jealousy...
Send a private message 12 4 Reply
I feel like there's not enough to go by here. We don't know if he's a deadbeat or a model citizen.
Send a private message 16 2 Reply
Reply
It could have been his only day off in weeks and he just wanted to spend it by himself relaxing. Grand Theft Auto V is also a really fun game.
Send a private message 4 1 Reply
I don't understand why this is considered a bad thing? As long as he is a functional person and doesn't do this every single day then honestly I feel he deserves to be able to stay up as long as he wants doing whatever he wants.
My dad works 60+ hours a week, often going in on his off days to work. He provides for my family in full, is a functioning human being, and maintains social relationships. so if the man wants to space tfo and shoot people in the face then more power to him.
don't judge because you haven't put in half the dues that man probably has.
Send a private message 19 5 Reply
I think it really depends on how often this happens. If he's constantly ignoring responsibilities and playing video games all day then yeah, that's bad. But if he just occasionally enjoys a day off by playing games, there's nothing wrong with that.
Send a private message 177 0 Reply
Reply
I basically agree. 2 points of data does not a pattern make :) My wife and I used to work opposite shifts. One day I fried her some eggs and bacon for breakfast (she was eating and running). I started cooking mine as she left. Woke up, wanted more eggs and bacon, so started them. She came home and had missed lunch so I gave her what I was cooking, FYI the best fried eggs and bacon take just over 9 hours to cook.
Send a private message 5 1 Reply
Reply
That's what I used to tell my mom

&quot;Nooo, i've not been playing all the time. you just happend to get at me in the only two Moments i was gaming.
Mooom seriously, I was only playing videogames like 15 minutes each time...&quot;
Send a private message 2 1 Reply
Sorry man I'm 37 and I game too. we earned the right to game on our days off. Wait you turn!
Send a private message 8 1 Reply
I don't wake up till almost 3pm most days, I go to bed when the sun starts to come up (usually a couple hours after actually). I eat tacos and hot wings for breakfast, waffles for dinner. I'm going to drink half a bottle of vodka and have a few beers while I play video games for a bout 5 hours before I go to bed and wake up around the crack of 3pm to get some wings and go to work. I'm 38. 18 year old me was a bitch.
Send a private message 7 3 Reply
CONGRATZ on having adult hours at age 18!
Send a private message 5 0 Reply
I feel like more detail would help here. Like this doesn't say if he has other responsibilities he takes care of like work and/or household/family stuff. If he does it's more than fair for him to spend his free time however he wants, if that's playing video games fine.

And I mean, you weren't home how do you know he didn't stop playing for a few hours to run errands or something? I mean, if you use the theory that you saw me in the morning and I was playing with my laptop and then you saw me in the afternoon and I was playing on it that must mean I've been on it all day then you'd think I'm on it all day every day. But I play on it a bit in the morning when I have time, go out and do my stuff for the day and then come home and play again. So maybe you shouldn't assume (unless he or somebody else in the house told you of course but if they didn't and you weren't there you don't know).

If this is how he spends all his time though and he doesn't work or anything that's different.
Send a private message 4 1 Reply
Next
Spicy
Today, it's the fifth time this week alone I've attempted to explain to my boyfriend that I need more than just two minutes of foreplay to get horny. He...
I agree, your life sucks
53
You deserved it
14
1 Comments
Today, my 5 year-old daughter and I had the displeasure of walking in on my husband going down on another woman. I don’t know what’s worse, the fact that...
I agree, your life sucks
658
You deserved it
26
3 Comments
See all the Spicy FMLs
© Beta&cie, All rights reserved