Log in
By Lepisma - United States - College Station
Today, I faced my severe phobia of spiders in order to remove a rather large one from my home. After 20 minutes of desperate struggling, it was finally taken care of. Relieved, I sat down and glanced across the hallway just in time to see a second, equally large spider strutting across the wall. FML
I agree, your life sucks
48363
You deserved it
4345
180 Comments
Favorite
Tweet
Share 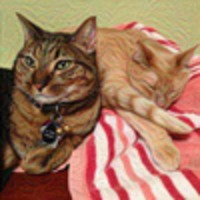 Lepisma tells us more :
I usually handle smaller spiders okay unless they surprise me, but these guys were big. This happened at about 1 am last night and my housemate was asleep, so a vacuum was not an option. I did use big spray. In fact, I nailed the first one three times and it shrugged it off like a BAMF (it was a Texan spider, after all). I actually already have a cat - two, in fact. They were very interested in the spiders, but I didn't want them to get bitten, so I didn't let them get close enough to attack. I finally got the first one in a cup with a lid and filled that sucker up with the bug spray. That worked! Then I saw the second one and about died, myself. It ended up under a cup eventually, too, and met Mr. Shoe. Thanks for the suggestions, though - they made me laugh!
Animals By Dan
Today, I put some Gold Bond in between my legs to help reduce moisture. After I finished applying it, I discovered that the Gold Bond had Menthol in it. My crotch is on fire. FML
I agree, your life sucks
1548
You deserved it
2255
17 Comments
Favorite
Tweet
Share
By Anonymous - 29/7/2020 08:00

Being afraid of spiders is an irrational fear. You should be cautious of spiders, as some of them are poisonous, but yiu should not fear them. There is no reason to fear something so small. That's like being afraid of bugs.

If you see a spider, kill it or keep it around to kill bugs.

Also, vo camping guys. You will see tons of spiders and will most likeky get bitten a few times. It really doesn't hurt.
Send a private message 1 14 Reply
Reply
Really? You think I should &quot;stop at life&quot; because I made a valid point that many other people agree with?