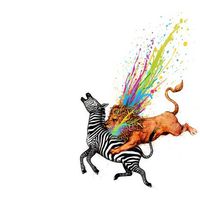 dragonmirado tells us more :
I thought it was blond for boys and blonde for girls. Like you wouldn't call a brown haired boy a brunette!
Miscellaneous

(I'm sorry, I really needed to get that one out.)
Send a private message 47 1 Reply
Reply
111- Wow! I am so impressed with your knowledge! :)
His mother was Jewish though. They did a huge program on National Geographic on him. The problem with Hitler was that he was such a child and he never grew up. He wanted to be nothing like his father. His dreams were to be a famous artist and, quite frankly, he sucked at it. When he failed at being an artist, he threw a fit and decided he was going to rule the world. (The historians got that info from Hitlers journals). He turned out to be his father in the end.. Except much more evil.
Send a private message 23 2 Reply
Reply
Hitler didn't decide he wanted to rule the world because he wasn't a good artist. Quite frankly, Hitler was a very talented artist.
Send a private message 9 15 Reply
Reply
I think he got angry when he was rejected by an art school whose owner was Jewish. His drawings are good, to be honest.
Send a private message 18 4 Reply
Reply
159 and 174- His rejection at the Art Institute had nothing, at all, to do with the owner being Jewish or anything of the sort. He was rejected because his art style was different and disliked by the owner and admissions staff at the Institute. Which only added to his hate for people. And yes, that was the final straw for Adolf Hitler. That is what made him go into the military. And that is what made him turn into the biggest brat to ever live. When he was rejected, he went into a tantrum and he filled up 3 of his journals plotting against everyone and journaled about his plan to take over the world. He, basically, lucked in to his spot of authority that he gained. And, therefore, gave him the needed power to live out his plan.
Send a private message 11 4 Reply
Reply
Godwin.
Send a private message 1 5 Reply
Reply
If he was a "childish tyrant", he wouldn't have conquered most of Europe. Just saying.
Send a private message 2 6 Reply
Reply
Yea, sadly i have to say Hitler wasn't childish. He frankly had the best military strategy. The only flaws he made (that i know of) was invading russia and promising japan to follow suit if they declared war with america bacause he saw the americans cut off japans supply of oil. All this is what i learned in school. Another mistake i read in a book about WWII was him invading sweden or some northern smaller country during the winter COMPLETLY unprepared (they mostly died of cold cause they were in summer cloths) sorry about grammer and spelling, this is right off the head, correct me if im wrong. Had he not make the 2 big mistakes though, im sure more of the world would be speaking german about now
Send a private message 1 2 Reply
Reply
Acually now that im thinking of it more, im not sure if it was over the oil, because idk if he promised to follow suit before or after the americans cut japans oil. Interesting all around
Send a private message 1 1 Reply
Reply
He didn't totally suck at art. It just didn't stand out. He had quite an impressionist style to his paintings. So he got mad and decided to trash and steal all the art he could.
Send a private message 1 0 Reply
Reply
When I say childish, I mean the whole "I'll destroy all of you meanies!" attitude that kinda started it all. The fact that he could not bear failure is childish. Etc, etc. You get the picture.
And Silentbutfunny, I'd say that Hitler's biggest mistake was going bonkers and starting genocides (some people actually claim they never happened. The denial some humans being sometimes shroud themselves in never ceases to amaze me.). When it comes down to strategics, he wasn't much of a brainer; he had loads of followers and THEY were evil geniuses, especially when it came down to inveting new ways to torture the defenseless. Though Hitler had a few ideas of his own, he became much more of a figure after a while and, ironically enough his name was not the most feared in most places since he hardly did any of the "dirty work".
By saying this I do not want, in any way, to lessen his crimes.

And imagine the world speaking german... Well the idea sends shivers down my spine because it would mean that the UK never landed in the Normandie, that the south of France never fought for their country and freedom, that the US of A never decided to stop selling weapons to both sides and never decided to finally testing their nukes on Japan, etc.. etc... (this is not an attack on the USA. Please don't try to act like a patriotic fanatic and make peace with the fact that some of our forefathers behaved like greedy chickens. Hell, I'm french and I can laugh at the faces of arrogant french ignorants that claim France never gave up and always kept fighting.) And I'd go as far as to claim that, hadn't history taken it's course the way it has (or more exactly, the way it is told), someone would've stood up against the Reich anyways.
Hell, who'd want to be forced to learn and speak german? It's really a personnal choice; some people really can't stand that language ( I know I couldn't at first)... ;-)

First of all, Teyyoshi not an idiot. WHY? He's learning English, AND he's a major in physics. Second, i've seen worse, way worse than Teyyoshi's comment's (I'm not calling his comments bad).