Log in
By Tiny_Nerd - United States - Westwego
Today, my mother-in-law told me that God won't allow me to have a baby with my husband because we're both agnostic. Yet it seems God thinks her druggie daughter can have two just because she's a Christian. FML
I agree, your life sucks
19023
You deserved it
1436
77 Comments
Favorite
Tweet
Share 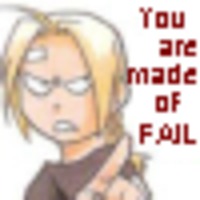 Tiny_Nerd tells us more :
OP here. To clarify my husband and I have been trying to conceive for a year and three months. I had reasons prior to starting (inconsistent cycle, family history) to believe I might be infertile, but we wanted to wait a year and see. We're currently about to get checked out and tested to see what's what. This particular incident I was talking to my mother in law about the fact we haven't managed to conceive yet and her advise was to "pray to the Lord with all our hearts" for a baby. She knows very well that my husband and I are agnostic, so I reiterated to her (as I've had to do since I was in the dating stages with my husband) that we are agnostic and not inclined toward Christianity at all. Her immediate response was "that's why God won't give you(my husband and I) a baby". To be fair to her, I will say I've heard about her background and it was pretty abusive so this is a learned behavior (though it's no excuse). From what I've seen while she's not as bad as her parents, but she has some pretty abusive tendencies which has more than once resulted in bad fall-outs and drama; more often than not with women (males are not exempt) who are either in the family or connected by familial ties. She tends to be quite controlling and doesn't react well when people don't do what she wants. It's been suggested before that she get therapy, but she refuses as she thinks there's nothing wrong with her behavior. Everyone knows she's like this, no one likes it. As for this particular incident it was pointed out by my husband that this was her way of aggressively trying to convert us because that's her "Christian" way of loving; in her mentality it's for our own good. My husband did stand up for me when he found out. Her response was less than stellar. My husband loves his family (his mother too, even if he doesn't like her) and unfortunately you can't avoid his mother without avoiding the family as well. I do my best to avoid drama while still standing my ground and not letting myself get walked all over which isn't easy as you can see. As for my sister in law I won't go into specifics, but her children are going through a bad time (because of both their parents) and we can see how it's affecting them. My husband and I have been trying to think of ways we can convince their parents to allow us to have temporary custody till at least one of them can give them a stable environment (though to be frank I wouldn't mind if it was permanent). One last clarification: I have nothing against Christians. I'm actually a theology nerd (amongst many other nerdoms). I actually consider this type of "Christian" behavior an affront to what the religion is supposed to be. My husband and I had a discussion and we've decided due to this incident when we DO have children one way or the other (whether it be natural, from fertility treatments, fostering, or adoption) we will absolutely forbid his parents to talk about religion with them or around them at all nor will they be left alone with the children unless it can't be avoided (like if we had an emergency). If they try to do so anyway visits will be limited or cut off. We had already decided that it would be in our wills when we have children that his parents (among others in both our families) under no circumstances are to get custody if something happens to us.
Miscellaneous

Today, after sex, my boyfriend turned to me and said, "You know, sometimes, you look like Kevin Spacey." FML
I agree, your life sucks
29509
You deserved it
3688
126 Comments
Favorite
Tweet
Share
By meat is meat

Alexa, play "Meat Is Murder" by The Smiths

That's not a child, that's a bio-hazard!