Log in
By Enslaved - United States - Homestead
Today, I found a phone in a fitting room. I called the number that said "home" to let the owner know that I was going to give it to the store's manager. Apparently the husband didn't know his wife was out shopping and "blowing all his earnings". FML
I agree, your life sucks
32271
You deserved it
2697
84 Comments
Favorite
Tweet
Share 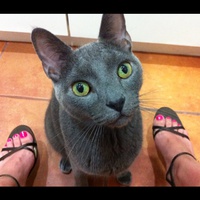 Enslaved tells us more :
OP here! First off, when I called the number, a man answered. When I told him I found a phone,(an iPhone5c for those that are curious) he told me to "fuck off" and that I had the wrong number, then hung up on me. He called the phone back a few minutes later and I could hear him yelling to what I assumed was his wife/GF in the background. He was asking her if she went out shopping? and how dare she spend his money, plus lose her phone! I did give the phone to the manager of the department store and told the man to pick it up there tomorrow if he wants it, since the store was already closed for the night. My heart is just uneasy because I know that my call caused what seems to be an argument between the lady that owns the phone and an irate man. I could tell he was very controlling and she was very afraid of him.
Money