Log in
By Grand_Cookie - United States - Norfolk
Today, it transpired that my mom has been spending her stint in prison trying to play matchmaker for me, going so far as to call one of her finds, "good breeding stock". Apparently, I don't already have enough criminals in my life; last September I was the only member of my family of 5 not locked up. FML
I agree, your life sucks
45923
You deserved it
3107
73 Comments
Favorite
Tweet
Share 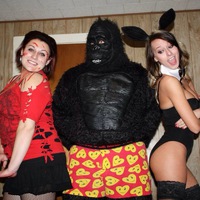 Grand_Cookie tells us more :
Haha!! Thanks for the support and funny comments! I am a guy and these people she talks about are women and aren't there for anything violent. A few of them have drug/alcohol problems and the rest like to steal things which are also pretty much the same things my entire family did to get locked up at the same time along with some other stuff I don't feel like listing. The sad part is that some of them seem better then the semi-insane girls I usually end up talking to.
Love