Log in
By Misaki18 - United States
Today, my boyfriend got offered a job at Abercrombie. The first thing he asked was "they only hire hot people, right?!" Now he won't stop telling me how lucky I am to be with such a hot guy. FML
I agree, your life sucks
47591
You deserved it
6223
251 Comments
Favorite
Tweet
Share 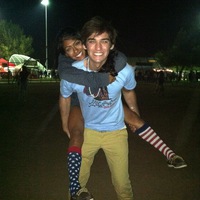 Misaki18 tells us more :
Yeah he thinks he's better than me , I feel like a Cinderella after midnight while he's the prince. He's always bragging about how good looking, smart, and charismatic he is and now it's worse. -_-
Love

I can understand why people would hate the store if the chain owner was a complete prick.
Send a private message 50 5 Reply
Reply
a couple if things, 1 no one shops at abercombie anymore, unless you're in elementary school! its all about Brandy, Urban, pacsun, and a few other other stores but I'm getting lazy typing. 2 (not to sound like a bitch) but cool people don't get clothes that have the name of a brand on them, I can tell where clothes are from by looking at them!
Send a private message 6 62 Reply
Reply
The store owner also said he wants cool attractive people wearing his clothes so they hire cool attractive people. The real zinger... The owner himself is far from hot
Send a private message 35 3 Reply
Reply
111, that entire comment made you sound like a giant douchebag. And the sad fact of life is, yes, you are judged by your appearance and yes, your brand of clothes. Especially in high school, two people could be wearing the same outfit but people will ironically think the one that cost more looked better. Life, my friends.
Send a private message 28 4 Reply
Reply
Although i agree with you on the douchebag part 126, i have to say you can look really good with offbrand clothes, i used to buy all those expensive brands like guess armani and express, but after a couple of years you realise clothes from jcpenny and mayces and random stores look just as good if not better at like 1/4 of the cost. Brand is all about bragging about the expensive clothes which is complete BS.
Send a private message 19 1 Reply
Reply
129 - I agree, oftentimes, especially once you're out of high school and are in college and/or in the workforce, it's really comfort and affordability that matters, not so much brand names. I mean, I can understand wanting to splurge every now and then, but there comes a point when off-brand things are great when you know you can still afford a meal and gas money after your clothes shopping trip.

It is one thing to cater to a certain clientele, it is another to imply your clothing is some sort of standard of beauty.
Send a private message 52 1 Reply
Reply
the reason for plus-size only shops is because skinny bitch shops like A&amp;F (I'm not saying the customers are bitches, but the man at the top is) don't cater for plus-size people and make them feel inferior because &quot;fat people aren't worthy of wearing those clothes&quot;
Send a private message 28 6 Reply
Reply
47 - I agree with you. Now I think the owner IS a super douche and he shouldn't make it seem like being overweight means you aren't beautiful because everyone is beautiful in their own way. But people would come into my work (Hollister) and complain that we dont make plus size clothing and that we discriminate against 'fat' people. Now I like Hollister because they make super small clothing, I'm very tiny, not by choice but by genetics. I have an extremely hard time finding clothes that fit, and you don't see me going into plus sized shops complaining about their discrimination against skinny people. People are too quick to use that word a lot of the time.
Send a private message 15 24 Reply
Reply
He was messed up for saying it. Fact of the matter. He is rich as fuck, because he is smart. Not lucky. Like the owner of chic filet coming out and saying he hates gays. He won't lose any business because of this. He was just a guy stating his opinion. Fat people have a choice to be fat, and he knows it. Maybe he was bullied by a fat kid growing up. Who knows. Either way, each and everyone of you have a bias or hatred towards something. You're just too broke and unimportant to be heard. If you don't like the guy. Don't shop there. Complaining doesn't make the problem any better. And over eating and lack of physically activity won't make you and skinnier. Such is life.
Send a private message 11 33 Reply
Reply
Not selling to black people is discrimination because they can't change their skin they're born that way. Fat people on the other hand can change 99.9% of the time.
Send a private message 11 28 Reply
Reply
Black people can't change their skin color? Tell that to Michael Jackson! He'll be all like, &quot;Yes we can!&quot;
Send a private message 30 0 Reply
Reply
It's one thing saying you only want to sell your clothes to attractive people. It's another thing entirely to say that, when you yourself look like Gary Busey after a bad run-in with a hornets nest.
Send a private message 28 0 Reply
Reply
Not killing children? They just use them to make their clothes in sweatshops and pay them about a dollar a day. No different to Nike or even Victoria's Secret... These companies are all about profit, so they pay the people who make the clothes next to nothing because they live in developing countries and are desperate and then they sell their merchandise in the West at high cost to their customers because they can. It's blatant greed. While I'm at it, that superficial bloke whom owns Abercrombie is the biggest wanker I've seen. Spends his billions on fake tan, teeth bleach and twinkies I reckon.
Send a private message 18 4 Reply
Reply
Whoa whoa whoa lets clear some things up. Chic Fil A did lose customers because not only did the CEO come out against gays, but they also admitted to funding anti-gay groups. In 2010 they donated 1.9 million through the WinShape Foundation. That's not just 'stating an opinion'. That's funding groups whose mission is to prevent equality.
As for the A&amp;F CEO, yes he was just saying an opinion. However, just because he may not find fat people attractive doesn't mean he has the right to bash them for it. Props to all the people out there who donated the clothing.
Send a private message 15 2 Reply
Reply
Except what micheal was born black. Nobody is born fat. And fat people don't need procedures unlike Michael Jackson.
Send a private message 1 12 Reply
Reply
Mangoboy1 the thing is about that owner is yes he can market to certain people but he said &quot;i don't want ugly people wearing my clothes&quot; have you seen what he looks like?? He's ugly himself.

P.s. my boyfriend agrees that that is definitely a douche bag thing for your boyfriend to do.