Log in
By LadyGoombah - United States - State College
Today, after 6 months away, I came home to find out my mom has essentially untrained my dog by spoiling him rotten. She has, however, taught him to fart on command. FML
I agree, your life sucks
13160
You deserved it
1196
34 Comments
Favorite
Tweet
Share 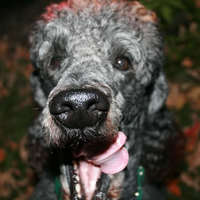 LadyGoombah tells us more :
Hey guys, OP here! I've been having fun reading the comments and, out of context, I would totally deserve this. However, this happened about 6 years ago and I just wanted to share this with you all because my mom is an FML gem haha. "My dog" was actually the dog I received as my 13th birthday present. In all honesty though, he was more my mom's dog than anything.. she even chose the breed so it appealed to her tastes rather than the rest of the family's (standard poodle). Then she let my sister name him after she threw a hissy fit and he was dubbed Danzig (Danny). But Danny was great and really smart when we first got him. He caught onto tricks almost instantaneously. Sadly, my mom who is only 4'11 and 90 lbs and a total nut thought allowing a grown 1 year old standard poodle to jump out of the car on his own was too much to ask of him and was convinced she was supposed to carry him out instead until one day she dropped him on his head on the driveway. He actually had brain damage and he was unable to be trained very easily (it took months just to reteach him his name) but he was still such a sweetheart and a joy to be around! So when I say she "untrained my dog", it had much less to do with him not listening to commands and more to do with the fact that he had been respectful of other people and gentle and knew not to eat food off of the counters until after I left.. in which case she taught him it was okay to jump full force on guests, steal food off of people's plate (he made attempts even when you were watching!) and, of course, SOMEHOW teaching him to fart on command to "toot toot!" (she didn't even know how she successfully did it. Probably just by saying "toot toot!" every time he farted for 6 months). My mom thought it was the greatest thing and during dinners she would just yell "toot toot!" and Danny would release some of the most vile farts haha As for the people wondering why I left my dog for 6 months with my mom, I'm sure in context you can see it was to go pursue an education since when I left I was 18. I'm 24 now with my own lovely black lab Nylah and I can barely leave her with a dog sitter for more than a day without feeling guilty! For your own amusement, I have made my profile picture of the dog Danny (if you look, you'll see red and orange on the top of his head. That's because my mom gave him a mohawk from head to bottom and had it dyed red).
Animals