Log in
By BabeWithBrains - United States - Cheyenne
Today, my boyfriend bought a onesie. He sleeps in it, goes out in it and won't take it off, not even for sex. FML
I agree, your life sucks
45637
You deserved it
5924
151 Comments
Favorite
Tweet
Share 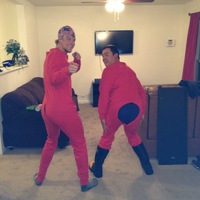 BabeWithBrains tells us more :
Wow, I didn't think I would get published. Let me clear some things up:) -My boyfriend and my brother-in-law are best friends and bought onesies together. They have been wearing them all night and day. They are a bit crazy, but fun. -My boy works outside in snow, so that's why he wore it to work. -It's also below zero where I live so it's cold at night, hence the bed wearing. -The sex however... Well, there is basically a slit in the back and buttons in the front. He thought it was hilarious, but it won't be happening again. I guess it's just something that he wanted to try and I love him so I did it. Oh, and it doesn't smell.. Yet. ;)
Love