Log in
By washcaps - United States - Bristow
Today, I sent a text to my volleyball group chat congratulating everyone who made the school team, which I hadn't. Someone removed me from the conversation. FML
I agree, your life sucks
14614
You deserved it
1575
48 Comments
Favorite
Tweet
Share 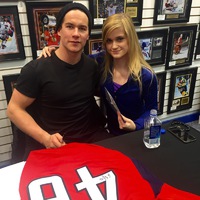 washcaps tells us more :
Hey everyone, OP here. (: First off, I would like to thank you guys for your nice comments, they made things better! And since I didn't have much room to explain, the group chat was consisted of the girls in the coed league we all played together in the winter, thus creating the chat. We all attend the same school and are all upcoming sophomores that tried out for JV. The competition was very hard. In the end the coach toke 6 sophomores, (all that played in same coed team) and 8 juniors. There were 9 of us in that didn't make it, also all 9 were in the chat. After I realized I was removed I was a little saddened and didn't quite understand why because it wasn't anything too much. A friend of mine that also didn't make it informed me that after I had been removed, she congratulated them too, and she had also been removed. So basically it's came into realization they aren't worth it and I'm more likely to try another sport but if I can't decide on one I might just practice more. Sorry it's long, and thank you if you read!
Miscellaneous Today, I was supposed to have a hospital appointment I've been waiting three months for, but they changed it to a phone call. The call consisted of the consultant asking questions and saying, "Yes, I see that in your notes", before concluding I need to a physical appointment and booking one… for three months' time. FML
I agree, your life sucks
922
You deserved it
46
3 Comments
Favorite
Tweet
Share
By lani - 24/5/2021 00:00

Today, I went in to see my piercer. He took one look at my piercing I got a few months ago and laughed saying "What a shit job, I'm sorry but that's pretty crappy because it's not even straight!" I then had to awkwardly explain it was indeed him who had pierced me. FML
I agree, your life sucks
35794
You deserved it
4092
165 Comments
Favorite
Tweet
Share
By notaslut - United States - Greeley

Today, I walked into my best friend's house and her mom threw a box of condoms at me and said, "Stay safe, slut." FML
I agree, your life sucks
2601
You deserved it
578
8 Comments
Favorite
Tweet
Share
By Anonymous - United States - San Francisco