Log in
By Btwigster - United States
Today, my boyfriend and his bandmates were doing a live interview for a web show. Drunk off his ass, my boyfriend starts telling the internet how his ex-girlfriend is his biggest inspiration. I was standing right next to him. FML
I agree, your life sucks
39933
You deserved it
3968
133 Comments
Favorite
Tweet
Share 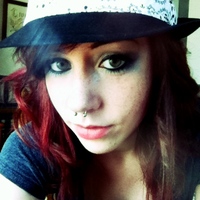 Btwigster tells us more :
He's in a punk band, like, old school punk. Very '70's sounding. They don't even sing about girls that I've noticed! However, he apologized later and explained he was just nervous, and that it would never happen again. I believe that he was just nervous, but that sort of thing sticks with you, you know? You can't help wondering if that's how he really feels.
Love

Today, a friend asked me to cover his shift at work because his grandmother died. Like any decent friend, I obliged. Later, after leaving, I walked by a bar and saw him inside, laughing and doing shots with all of our friends. FML
I agree, your life sucks
1932
You deserved it
132
10 Comments
Favorite
Tweet
Share
By Anonymous

Pencil in the ass time