You know when something isn’t going to end well, but you just can’t seem to look away? that’s how we feel about the 61-year-old limo driver turned daredevil who will attempt to prove flat Earth theory in his homemade rocket this weekend.

When it comes to flat Earthers, it’s easy to make jokes. But when people start engaging in life-threatening activities to prove their point, it starts to get a little sad. Mostly funny, but a little sad.

Take ‘Mad Mike’ Hughes of Apple Valley, California for example. He only recently converted to Flat-Earthism, but is already going to great lengths for the cause. According to AP News, this Saturday he will be launching a rocket he built himself 1800 feet into the air over the Mojave Desert. That’s not all: Hughes, 61, will be manning the rocket himself.

“It’s scary as hell, but none of us are getting out of this world alive.”

That’s the kind of attitude you’ve got to have when attempting something like this. 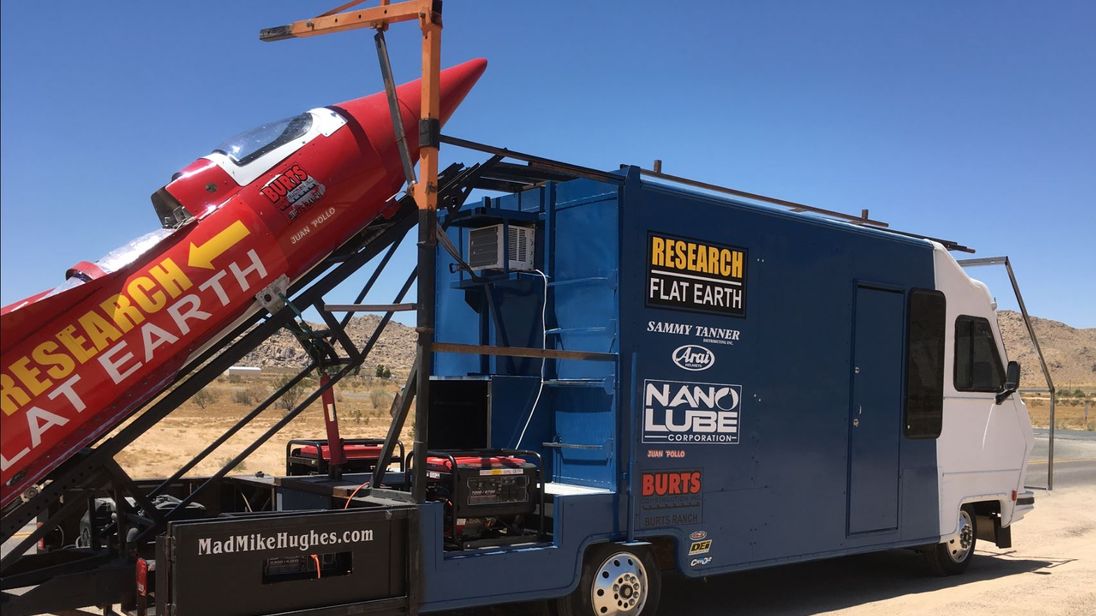 The project, which started as a Kickstarter campaign only raised $310 of the $150,000 goal and was eventually funded by a flat earth research group. In total his project cost a total of $20,000. And although it’s nowhere near as grand of a project as Hughes had intended, it’s still a hell of a lot to invest in someone who admittedly doesn’t believe in science.

“I don’t believe in science. I know about aerodynamics and fluid dynamics and how things move through the air. But that’s not science, that’s just a formula.”

This is literally rocket science, bro. Before you hurt yourself, you should back away from the rocket, and stick to limos. It’s what you know best.

But even as a limousine driver, his day job, he’s no stranger to thrill seeking. Mad Mike earned his name in part for setting a Guinness World Record for a limousine jump in 2002. His venture into the world of high-speed deathtraps continued in 2014, when he made, launched, and manned his first rocket.

The injuries he received after the launch put him in a walker for two weeks. This time around he’s attempting to go four times as far, so who know what will be in store this time but I’m thinking it rhymes with schmasket.

I honestly hope the launch goes well, though, for if it does, Hughes has some big plans in store. Firstly, he plans to announce his run for governor immediately following this weekend’s stunt. Secondly, he plans on taking his rocket and flying it past the ice walls that Flat Earthers imagine mark the edge of the world in order to learn more about what lies beyond. He is truly a pioneer.
The launch will take place this Saturday, so be sure to keep up with his story and find out, well, if it ends there. He’ll be livestreaming it on his website, so check it out here.